The Alchemical Revival in Music

Audio Alchemy is a fusion of modern music making and ancient alchemical wisdom. It’s purpose is to serve artists in their creative, personal and spiritual development. The concept was born in 2016 from the minds of Steve Young (@hedflux) and Andy Freist (@opulence) who co-founded the Audio Alchemy Retreat in Hawaii. 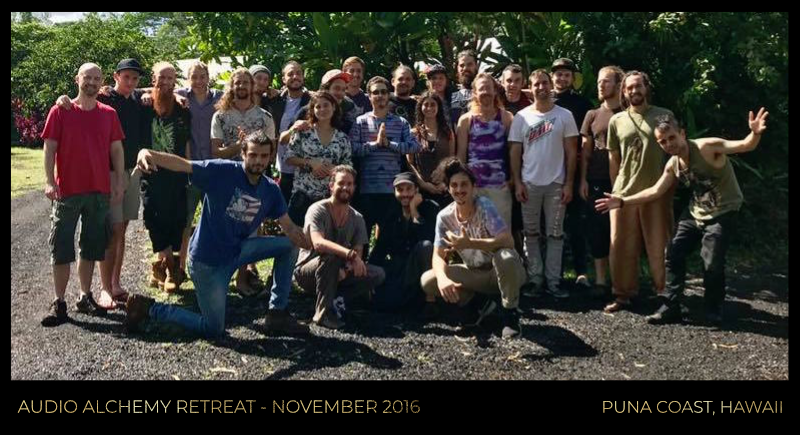 After running 4 retreats, several regional workshops in the USA, and a free 9-part webinar series, there is now a large community of music producers adopting these methods into their practice. On Jan 11th 2018 we launched Audio Alchemy Records and released a free 17-track compilation album of alchemy-inspired music, the first of many more to come. Our next retreat is on May 2-13th 2018, which you can learn more about here if you’re curious.

In this post we will discuss the current revival of Alchemy and it’s application to music. You can stream and download our first community compilation here.

It was Terrence McKenna who coined the term “Archaic Revival” – the notion that we must look into the distant past and revive the knowledge of our ancestors in order to fully awaken and make sense of the modern world around us. This has been happening at a rapidly increasing rate, as the knowledge which was once tucked away on dusty shelves in museums and libraries, is increasingly digitised, reprinted, and available for immediate or next day delivery.

But it is up to us as individuals to re-search and re-member this lost knowledge, for such information has always been esoteric. It’s not taught in schools and universities, and there aren’t documentaries about it on netflix. The modern culture has our attention fixed on far more profane subjects, and has programmed us to believe that humans of antiquity were quaint and primitive, with a superstitious comprehension of the universe that holds no credibility or usefulness in the current age.

But even a cursory investigation of the universal mysteries reveals that this could not be further from the truth. It is evident that in many ways human culture has fallen from a previous level of knowledge, technology and spiritual glory so high we are hardly able to comprehend it from the shackles of our daily grind.

Alchemy is rooted in this ancient glory, it is a highly advanced system of universal knowledge which forms the conceptual basis of all science and spirituality. A practice so powerful that it was once only conducted under the guidance of kings and religious leaders, and was purposefully kept secret from the common man, coded in obscure writings, symbols, allegories, art, and architecture. 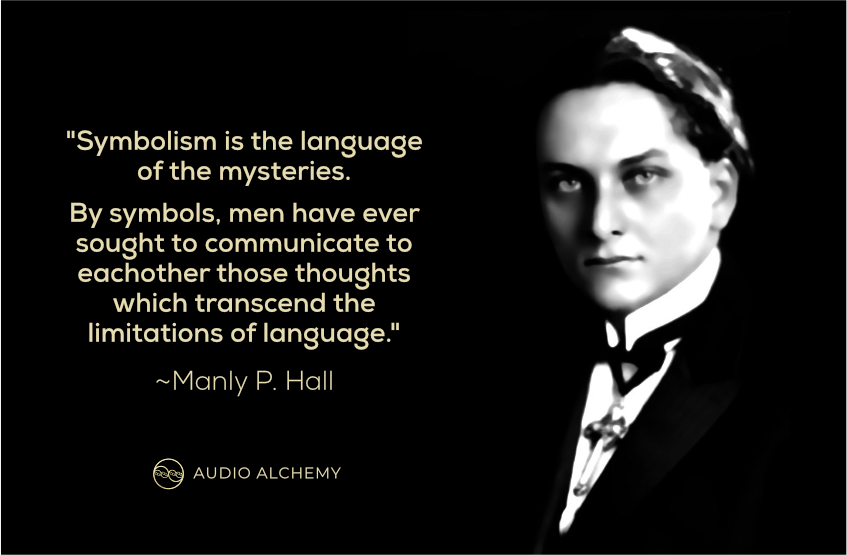 The common belief is that Alchemy was a medieval precursor to chemistry, concerned mainly with the transmutation of base metals (such as Lead) into Gold. The implication being that it was an entirely materialistic pursuit, fruitless, and driven by an egotistical desire for wealth and power. The reality however, is quite different.

Alchemy in essence is a noble, humbling pursuit. Often termed “The Great Work”, each advancement along the path brings greater awareness and sincerity to the practitioner, imbuing a strong sense of responsibility for the process of creation.

The scope and efficacy of Alchemy extends way beyond the realms of metallurgy and chemistry. It is a doctrine for the transformation of The Self, physically, psychologically, and spiritually. It is the esoteric root wisdom behind art, science and religion, and is a key to the reunification of these now disparate traditions.

At first this may seem like a lofty claim, but we must realise that the common process underlying all art, science, and religion, is the transformation of energy, be it internal or external, consciousness or matter.

The Alchemists understood that all things are just differentiated states of vibration of a single universal substance. We may refer to this as The All, The One, The Universal Mind, or even God. Such a being – the hermaphroditic unified source field of all things – is unnamable, but there have been many names given to it throughout history.

One consequence of oneness, is that any act of creation is necessarily an act of transformation. Things are not created out of nothing, to exist as separate and distinct from other things. Rather, all things are but different vibrational states of The One ultimate thing. Creations come into existence through a series of processes whereby the elements – Earth, Water, Air and Fire – are transmuted and refined to extract the subtle spiritual dynamics contained within them. The elements of alchemy do not correspond to the periodic table of elements in chemistry, but to the physical states of matter – Solid, Liquid, Gas, Light.

Consider for example the process of growth of a plant from seed. All the information pertaining to the geometry and functionality of the plant is contained within the seed, and then by surrounding it in soil (Earth) and applying heat/light (Fire) and rain (Water), it grows up into the Air where it expresses its most subtle and unique essence – a flower – and releases a new generation of seeds into the world.

Each plant is uniquely adapted to transform the particular elemental conditions of the region it inhabits. In fact, we can say that all living things, from plants to humans, and the cells and organs which constitute them, are energy transformers. The human body is a walking talking alchemical apparatus with which we can transform our inner and outer experience. 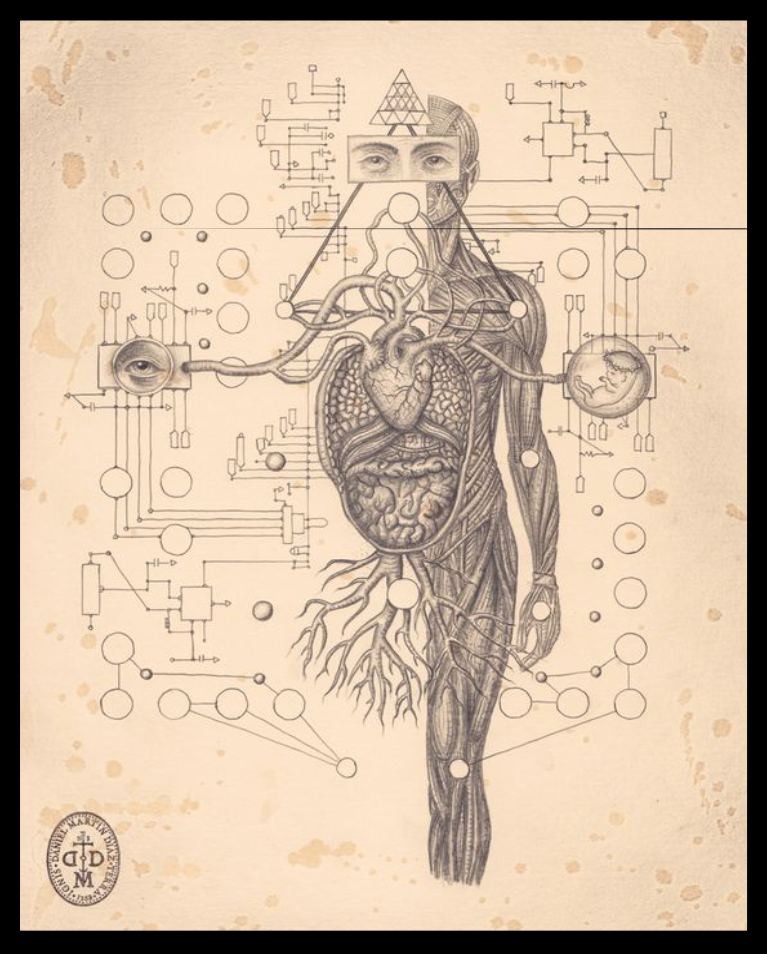 In the process of creating music, we are transforming our raw emotional experience into a harmonic expression of sound which is capable of releasing or compounding those emotions in others. In this way, music acts a lot like medicine. It may not cure you of a common cold, but it can shift those stubborn bad feelings which lead to disease, and raise you to a clearer and more advantageous emotional state.

But not all music is medicine to all people, since the primary mechanism of action – resonance – is sensitive to the mind and body of the human with which it is interacting. In general, it is a subjective experience between the music and the listener, however there are certain vibrations which are universally resonant in the right listening environment.

We have an internal sense that responds to resonance. Music that resonates makes us light up, we may feel the urge to dance, sing, and let go of our inhibitions. It may trigger deep insights and visions, out-of-body experiences or tears of joy and sadness. It may even inspire us to pick up an instrument and start practicing.

Anyone who has learned an instrument to a proficient degree, and had the opportunity to share their music to a receptive audience, will attest to its transformational power. Not only in terms of the effect it has on listeners, but also the effect it has on the lives of the artists themselves.

Making music is an alchemical process of harmonisation. The metaphorical Lead is our current situation – our thoughts, feelings and ideas, our instruments, computers and plugins. The goal is the “Gold” – the completed product you are working toward, your highest musical expression. To get from one to the other requires a harmonic transformation of the self.

With this insight from McKenna we can see how Alchemy applies to music. Our instruments, digital or analogue, are matter – a configuration of elements within which exists the potential for music.

It is our graceful and deliberate interaction with these musical objects that releases spiritual essence of the song from its prison in the matrix of our minds, disseminating it into the Air for all those who are listening.

There are seven primary alchemical operations that describe how spirit can be redeemed from matter. They apply just as effectively to music, as they do to chemistry, painting, architecture, or any creative discipline. They are the seven principles of creation, and we will discuss them in detail in future posts.

Thanks for taking the time to read our intro 🙂 We look forward to exploring these topics and more in much greater depth with you over the coming weeks, months and years.

Master Your Craft, Week by Week

Get music production tutorials, podcasts and deep-dives delivered to your inbox every week.

Please enter your name.
Please enter a valid email address.
Sign me up!
Something went wrong. Please check your entries and try again.